Books by current and former members of ACPP

Being and Becoming: Psychodynamics, Buddhism, and the Origins of Selfhood by Franklyn Sills 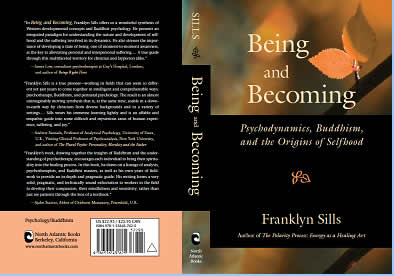 2008, North Atlantic Books, England and USA ‘Being and Becoming’ summary of Franklyn Sills’ many years of teaching and developing Core Process Psychotherapy together with his wife Maura Sills. Beginning with the origins of the self within the womb, Sills details the role of prenatal and birth experiences as the foundation of personality development and the beginning of human suffering.

‘Being and Becoming’ offers an interdisciplinary view of the development of selfhood and the process of “becoming,” drawing from Buddhist, Taoist, and Christian ideas. Sills applies the writings of Frank Lake, Martin Heidegger, William Fairbairn, Donald Winnicott, and Daniel Stern to this process as well, combining the theories of object relations, pre-and perinatal psychology, and Buddhist self-psychology. He unites these practices and ideas to uncover an all-encompassing process of discovery of the nature of the self and selfhood.

Through the journey to selfhood, Sills presents a model for understanding personal development and healing personal suffering. By following the process of becoming, an understanding of what it is to “be” arises. ‘Being and Becoming’ explores and explains this healing path of self-discovery and, through a unique synthesis of psychodynamic understanding and Buddhist traditions, offers a way to move beyond suffering.

Franklyn Sills is a co-director of the Karuna Institute and teaches on both the Institute’s Craniosacral and Core Process Psychtherapy trainings. His background includes psychodynamic and humanistic therapies and different forms of bodywork. He is one of the pioneers of the biodynamic approach in craniosacral therapy and has had a formative influence in this field. Franklyn’s background also includes orthodox sciences and medical research. He considers Buddhist teachings to be the foundation of his approach. He lives in Devon with his family.

Beyond Happiness: Deepening the Dialogue Between Buddhism, Psychotherapy and the Mind Sciences by Gay Watson 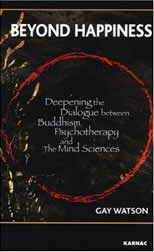 2008 Karnac Books, London “A compelling and original synthesis of psychotherapy, Buddhist meditation, neuroscience, ecology and feminism that points to a more sane and compassionate way of living in this world at this critical juncture in human history." --Stephen Batchelor, author of 'Buddhism Without Beliefs'. "

Gay Watson's new book is not only a thoroughly accessible and delightful invitation to us to reconsider our most granted assumptions about what it is to be human, it also embodies the very ideas that she presents. As we read we are accompanied by her presence and find ourselves directed toward our own direct, embodied experience in the context of that relationship. She reminds us that we are always interconnected even as we read 'Beyond Happiness' alone in our study. --Karen Kissel Wegela, PhD, Professor of Contemplative Psychotherapy at Naropa University, Boulder, Colorado

The Resonance of Emptiness: A Buddhist Inspiration for a Contemporary Psychotherapy by Gay Watson

Gay Watson trained as a psychotherapist with the Karuna Instititue. She holds a first class honours degree and a doctorate in the field of Buddhist Studies from SOAS, University of London. She is the author of Resonance of Emptiness: A Buddhist Inspiration for a Contemporary Psychotherapy (Routledge Curzon 2001), and Beyond Happiness (Karnac 2008) and co-editor of The Psychology of Awakening (UK: Rider 2000, U.S.A.: Samuel Weiser 2001). She is married with two adult children and lives in Devon.

2008, O Books, UK and USA ‘The Lost Way’ is a fictional trilogy that takes Christianity to the cliff edge of individual spiritual practice. Most of us received Christianity, as children, in the form of what to believe. ‘The Lost Way’ rediscovers a “Christianity for adults” for those willing to take responsibility for their own spiritual practice in everyday life: it breaks a religion free from the confines of dogma and takes its teachings to that place where they have to be lived in order to bring the divine alive in us.

The trilogy tells the story of a small group of people whose lives were transformed by the arrival of a teacher who brought with him the original meaning of Christ's teachings and who led them on a long-forgotten path to a new kind of living Christianity.

For more than three years he taught this small community to use Jesus' words, not as a sermon to believe in, but as a living gateway to a search for God's presence within themselves. The Lost Way resurrects the energetic force of inner Christianity, from the time of the original disciples, back into the modern world.

Alastair McNeilage is an accredited Core Process psychotherapist with a full-time practice in Cambridge and London. He is one of the organisers of ACPP’s upcoming conference ‘Mindfulness and Beyond’

Movie Therapy: how it changes lives by Bernie Wooder 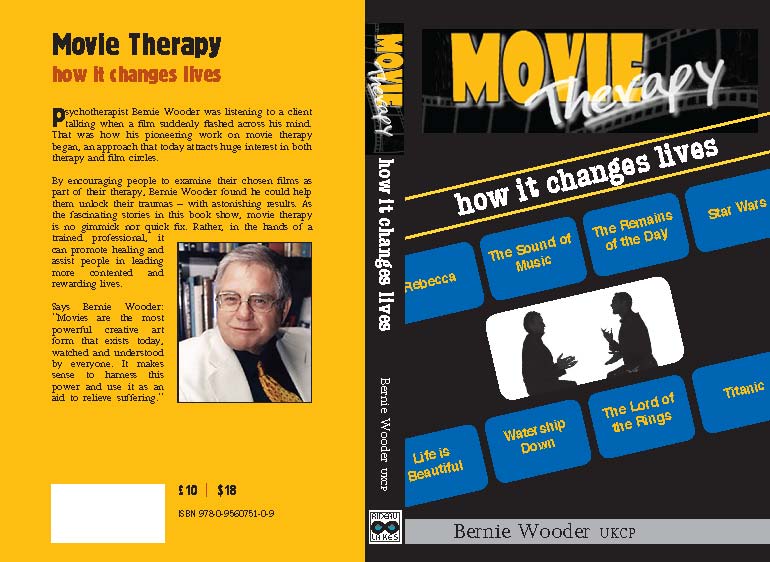 ‘Movie Therapy’ is a collection of case studies from clients who have found that the transformative therapeutic experience they needed can come from a moment in a film. Bernie Wooder has found that working with films is a way of using direct experience, rather than conceptual understanding, to anchor change in the body as part of the personality. In this he draws on the concept of neuroplasticity, which has been developed by neuroscience.

A film moment that is therapeutically beneficial can start the process of neuroplasticity, with the film moment drawing the attention and acting as a powerful catalyst. As psychiatrist, author and educator Dr Daniel Siegel has said, “Where attention goes, neurons fire, where neurons fire, they can rewire”. For over 2000 years the Buddhist practice of mindfulness has used this understanding, now confirmed by science, to bring about transformation. Freud’s description of images as “the language of the unconscious” points to the power that films have to reach deep layers of the personality.

Bernie Wooder is an accredited Core Process psychotherapist. He has pioneered the use of movies as an aspect of the therapeutic process for over 15 years. His commissioned work has included consultancy projects on Movie Therapy for MGM Studios and Warner Brothers and lectures at Guy’s Hospital in London. He has contributed to TV, radio and the press. He has appeared on the BBC’s Here and Now and Arena and Channel 4 and 5 news. On radio 4, promoting the use of movies as a therapeutic tool, he was interviewed by Professor Anthony Clare for the programme All in the Mind.

Tinnitus: From Tyrant to Friend. How to let go of ringing in your ears by Julian Cowan Hill

This book shows you how to let go of tinnitus and charts the landmarks of progress you make as you get better. You will find specific techniques to help distract, focus and relax you, so that you can manage this condition better. Julian developed these techniques to master his own tinnitus, and fine-tuned them working over many thousands of hours with clients. In this book you will find the fruits of many hours of research, study and clinical experience condensed into a manageable and positive approach to helping tinnitus.

Julian Cowan Hill is both a registered Craniosacral Therapist and a Core Process psychotherapist. He has a practice in London.